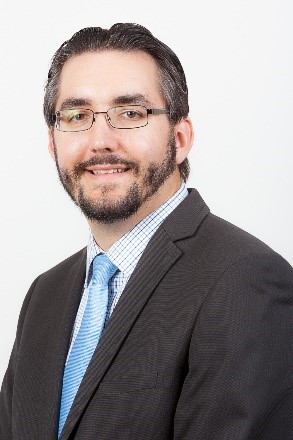 Personal Biography
Christopher “Chris” Erickson was born and raised in Chandler, Arizona one of the fastest growing cities in the Country. As a child, Chris saw new construction around him daily as farms gave way to subdivisions. He also witnessed his mother go back to school, to receive her Bachelor of Science in Management at Arizona State University. However, Chris knew that he wanted a different college experience rather than staying in state, applying and choosing to go to Stevens Institute of Technology in Hoboken, NJ. After college, Chris settled in the area and currently lives in Morristown, NJ. When not working on structural designs, his hobbies include photography and board games.

Professional Biography
Chris Erickson graduated from Stevens Institute of Technology with both a Bachelor of Engineering and Master of Engineering degree in 2005. Directly after graduation, Chris took a position with Louis Berger (now WSP) as a Structural Engineer where he worked on various high-profile projects including, the widening of the Trenton-Morrisville Toll Bridge and Interchange 7A of the New Jersey Turnpike’s 6 to 9 Widening Program. Currently, Chris works at The Naik Group, where he serves as the Deputy Director of Structural Design Services. At Naik, Chris has been a Project Manager for several bridge replacements in Somerset County and Task Manager for complicated structural tasks including the installation of sign structures on existing bridges on the Bruckner Expressway, and the structural hardening of some of Con-Edison’s facilities to prevent damage from the next Superstorm Sandy. As a member of the ACEC NJ Young Professionals Committee, he was responsible for the development of the Can Sculpture competition.

Fun fact
Chris finished third in a tournament for game “Liar’s Dice” that involved hundreds of players one year. The next year in the same tournament, he was the first to lose.

Favorite Quote(s)
“You must be the change you want to see in the world. “ – Mahatma Gandhi

My job would be a lot easier if… I could telepathically communicate what I want.